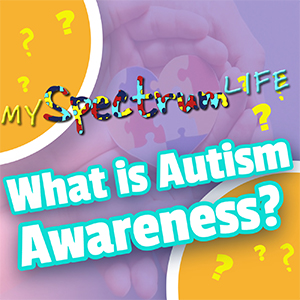 Show Description: With Autism Awareness Month just 2 days away, Jessica and Kelsey take a look at autism awareness and what it looks like.

Awareness: (as defined by Merriam-Webster.com) The quality or state of being aware : knowledge and understanding that something is happening or exists

Why the puzzle piece?

a visual aid to illustrate the ‘puzzling’ nature of autism

The origins of the puzzle piece, the primary symbol for autism, go back to 1963. It was created by Gerald Gasson, a parent and board member for the National Autistic Society (formerly The Society for Autistic Children) in London.

According to the Autism Society Webpage, the puzzle ribbon was adopted in 1999 as the universal sign of autism awareness.

What is World Autism Month?

Every April Autism Speaks celebrates World Autism Month, beginning with United Nations-sanctioned World Autism Awareness Day on April 2. Throughout the month, we focus on sharing stories and providing opportunities to increase understanding and acceptance of people with autism, fostering worldwide support. This year, we are committed to keeping the spirit of the month alive, as now more than ever we know the autism community needs support, kindness and compassion.

What is Light It Up Blue?

The Light It Up Blue initiative was created by Autism Speaks in 2010. Since that time, joined by the international autism community, hundreds of thousands of landmarks, buildings, homes and communities around the world light blue on World Autism Awareness Day (April 2) in recognition of people with autism.

Remember a lot of Faith, Love and Fidget toys, we’ll make it!